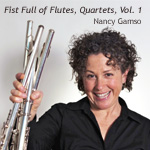 These quartets for four C flutes are appropriate for intermediate flutists and also work well for casual classical gigs, sight-reading and adult amateurs. All are published alone and range in style from Baroque (Scarlatti, Corelli), Neo-Romantic and Neo-Classical (Gossec, Koepke). Complete publishing information can be found below.

Tracks for each piece below are available separately as high-quality mp3 files. 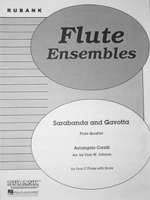 Archangelo Corelli (1653-1713) When we study Corelli we find a composer, teacher and music director who made a virtue of discipline when it came to teaching his violin students and ensembles – so much so that his techniques provided the model for other teachers. He also made an entire career as a composer writing only instrumental music and only in the forms of solo sonatas, trio sonatas and concertos.The research trail for this arrangement led to a publication of the Complete Violin Sonatas and Trio Sonatas, edited by Joseph Joachim and Friedrich Chrysander, Dover Scores (thanks to OhioLink and Case Western Reserve Kelvin Smith Library). Corelli’s Op. 5 are miscellaneous works, officially titled Preludes, Allemandes, Correntes, Gigues, Sarabandes, Gavottes and Follia, Op. 5, Part 2, published in 1700 and dedicated to Electress Sophie Charlotte of Brandenburg. These two movements are from two different sonatas in this collection. The Sarabande comes from Sonata VII, Op. 5, Part 2 and the Gavotta is found in Sonata X, Op. 5, Part 2. By the way, do you know that “follia” (also spelled “folia”) are early 18th century chord progressions over which musicians improvised, very similar to our blues progression? All of the follia in this collection have the same chord progression as described in the Wikipedia article for “later folia”. I see some Corelli-jazz fusion in my future.

Sarabanda: I love, love, love improvising ornamentations on slow Baroque melodies, so as you listen to this, I hope it inspires you to try it yourself. Here’s how:Step 1 - Get to know the music very well without the ornamentation. This is to assure that when you are comfortable with the music you can add the ornaments without disturbing the core rhythm and melodic line.

Step 2 - Listen to some model recordings of flute players ornamenting Baroque slow melodies. I cut my teeth listening to Rampal’s recordings of the Handel Sonatas (on vinyl!) over and over, so my repertoire of 18th century ornament vocabulary was ingrained in my musical brain. For Corelli, I found “Corelli: Sonatas for Strings” by Robert Woolley, Jakob Lindberg and the Purcell Quartet to be excellent.

Step 3 - Just experiment on your own. You can always transcribe my ornaments but you may have even more fabulous ones, so try a few different ones to see what sounds good to you.

Step 4 - Make sure your notes work with the chord underneath. If you have a pretty good musical ear, it will tell you what sounds right but you can also look at the chord under the melody for what notes will work. For example, there is a G7 in m. 9, so adding a b-natural is correct, since a G dominant 7 chord is spelled G-B-D-F.

The only other thing is to make sure your ornaments and trills are S.O.P. (my flute teacher at FSU, Charlie Delaney and the U.S. Army’s acronym for Standard Operating Procedure). That means, the ornaments are added on the 2nd time through the repeated sections and start the trills from above. Since the 1st player is having all the fun, you might try to switch parts at the repeats and let everyone have a chance to play the ornamentation.

The other considerations for this movement are soon quite obvious. They include intonation, deciding which breaths you need and which you don’t in order to phrase together, dynamics, note lengths, and the ritardando at the end. There will be a few short videos on some of these topics that may help, such as the Tuning video, so check them out.

Gavotta: This movement is spritely and perfect for flute players – we can so do spritely. I added a mezzo-piano at the pick up to m. 9 and changed the piano in the 3rd part at pick up to m. 13 to a mezzo-forte in order to bring out the melody. I added a downward mordent at the end in the 1st part, just for fun and because it was a common ending ornament for the style. Speaking of the ending, don’t you love the “and many more” tag in the 3rd part? I would have liked to have known Corelli, he has me weeping on the Adagio (flute trio) and laughing out loud on this one. 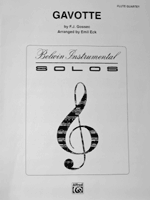 François Joseph Gossec (1734-1829), a French composer, managed to leave us the one famous tune – famous in the U.S. because Carl Stalling, composer/arranger for Loonie Tunes, loved using this Gavotte when Bugs Bunny, Elmer Fudd or any of the other characters were dancing the ballet. For those sophisticates out there who were Suzuki kids, you know this tune from your studies. In any case, Monsieur Gossec did love to compose: for opera, for the church, for chamber musicians and for his own orchestra (in his own concert series called Concert des Amateurs, as in ‘concerts for lovers of music’). He once had a band of clarinets, trumpets, horns, trombones, and eight bassoons placed in a balcony for a requiem mass just to illustrate the verse: “The trumpet, scattering a wondrous sound, through the sepulchers of the regions, will summon all before the throne”. Now that’s some liturgical show biz! I noticed that Gossec also had many marches and other music for wind band in his repertoire and found that he was actually the director of the Corps de Musique de la Garde Nationale at the beginning of the French Revolution. The purpose of the garde and the other musical groups in France at the time, was to stir up the common folk in support of the revolution. If you want to read more about Gossec and his wind band army, check out this online source for wind band history.The Gavotte is often arranged for piano. It’s not clear for what the work originally was intended, perhaps the manuscript listed in his works as the Gavotte in D for flute and string quartet. Here’s the link to the piano score.

First of all, a Road Map – after looking at the piano score, I decided that it would probably be best to include the da capo that is missing at the end of this arrangement. (Gavottes usually follow the same road map as minuets.) From the recording you can tell that I simply went back to the beginning and made m. 16 the ending. Typically this piece is played with a lot of humor, delays in the tempo, playfully running forward and pulling back, so have fun with that. I did change a few small things: the grace notes in mm. 4 and 8 should both be ‘c#’, m. 29 first part the note on the down beat of 3 should be a ‘g’, not an ‘a’. Notice that in my recording there are more notes performed staccato than the score indicates, as well as ones played long or tenuto. This gives the musical style both continuity and contrast. In spite of the editing errors, this arrangement provides all the players an opportunity to have a turn at the melodic content. I believe it to be an effective teaching and learning arrangement. 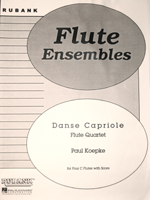 Go to YouTube and enter ‘capriole’. There you will find the most interesting series of horses doing this leap that finishes with a kick out with their hind legs. Isn’t that interesting? With that in mind, I decided that 80 to the half note was a bit quick for this leaping dance, so I recorded at 76. In my role as 1st flute player, I was constantly negotiating the lengths of the notes – not too short, not too long. Looking at my music, I have tenuto lines over a third of the notes, because the natural tendency is to play everything too short and it loses its elegance with the contrast. For the 2nd, 3rd and some of the 4th parts I was concerned with so many high sounds in this arrangement. So I toned down the dynamics and kept the tone light when these parts were accompanying. Sometimes of course, the 2nd, 3rd, and 4th parts get the melody, through which I certainly played to the fore. This is a good piece for the 2nd flute player to learn the lever Bb fingering, very handy in mm. 2, 4, 8, etc. This is a great piece, good for a light number on an intermediate recital or for contest. Enjoy! 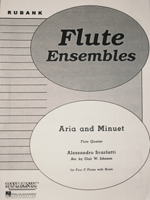 Pietro Alessandro Gasparo Scarlatti (1660-1725), the 2nd longest composer name on this website behind Mozart’s, was one of those Italian composers who jumped in early with the opera craze, writing over 70 of them. He also wrote church music, over 600 cantatas, which were as close to opera as the Pope would allow for his flock, at the time. The arranger, Claire W. Johnson, was an interesting character – as a kid he bought his first trumpet out of the Sears catalog for $12 and then as an adult, composed over 350 band compositions. Like many before him and many after, he had to fit his composing into the early mornings, before beginning his teaching day (at Weber College). The source of this little aria and minuet are not known (Professor Johnson died in 1970) but they were probably from one of Scarlatti’s operas.

For the Aria, I thought I would leave this recording unornamented (see the Corelli Sarabanda for a lengthy discussion on Baroque ornamentation). The reason for this is both pedagogical – I wanted a simpler version for students – and musical – the 1st and 2nd parts are so closely tied rhythmically that it is perhaps better to leave them both plain. However, cadential trills (trills on the long notes before cadence chords) can be easily added in the 1st part. You may notice that I omitted the breaths at mm. 2, 5, 10 and 21, and as well, moved the breath mark in m. 12 to after the half note and in the 2nd part, m. 15, to before the ‘f-sharps’. All the cadences are great opportunities to learn good intonation. On the unison ‘g’ I chose to take out the vibrato, as an effective way to capture one aspect of the 17th century style.In the Minuet, I was most interested in getting the staccato notes to sound full and crisp but not heavy. Then, in the measures with more lyrical lines, I intended to make the notes graceful and connected. My favorite spot in this one is mm. 17 -18, where the 4th and 3rd parts hand off the eighth-note bass line. Listen to see if you can make it sound like one player.