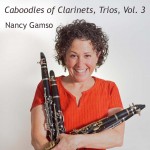 These trios for three B♭ clarinets are appropriate for intermediate to advanced clarinetists and also work well for casual classical gigs, sight-reading and adult amateurs. All but one of the selections are from Volume 2 of the Rubank Chamber Music For Three Clarinets. Complete publishing information can be found below.

Tracks for each piece below are available separately as high-quality mp3 files. 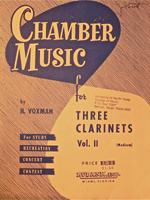 Ludwig van Beethoven (1770-1827) is probably best known for his famous Fifth Symphony and his unfortunate deafness. In 18th century Vienna, he was one of a long line of famous musicians, including Mozart, Haydn, Schubert, Brahms and many others. Beethoven wrote one opera and several choral works but mostly he wrote instrumental music. Folks who think about these things have noticed that his early works strongly resemble those of Mozart and Haydn (Beethoven’s Period of Imitation), Ludwig’s young adult music has a bold spirit (his Heroic Style Period), and his late-in-life compositions are more reflective (the Period of Introspection). What I have often wondered is why is it that Ludwig van Beethoven’s music seems to be the first of many composers to be so very closely related to his personal life story. I’ve come to believe that perhaps it is because he was the right person to come along at the right time – a true tragic and phenomenally talented character, born at the cusp of the most overtly emotional era of classical music history, the 19th century Romantic Era.

Music historians define “Romantic” rather different than we might in the 21st century. Romanticism in the 1800s encompassed tragedy, heartbreak, revolution, death, madness and, oh yes, occasionally love but usually tragically so. Ludwig, for his personal romanticism, had an emotion-filled existence. He came very close to having the opportunity to study with Mozart in Vienna but just before the first lessons, Ludwig was call home to take care of his dying mother. He suffered the fate of many abused oldest children by both taking the brunt of the abuse and becoming the defender/caretaker of his mother and younger brothers. He proposed to several women whose fathers thought Ludwig did not have the proper pedigree. He was even in Vienna when it was bombed (technically “cannon-balled”) by Napoleon’s army. Finally, the greatest tragedy – he lost his hearing just a few years after becoming a wildly popular pianist favored by the Vienna aristocrats. Really, the guy couldn’t win! Except for the fact that through it all, Beethoven was able to compose some of the most beautiful music ever written. Read more about Beethoven if you love a good story. There is a compelling movie that illustrates his life, with some fictional license, titled Immortal Beloved and a wonderful audio children’s story in the Classical Kids series, Mr. Beethoven Lives Upstairs. Check them out, he’s quite a character.

The Trio in C major, Op. 87 was composed for two oboes and English Horn in 1795. It is a four-movement work, the Adagio being the 2nd movement. (I’ve also recorded the ‘Menuetto’ and ‘Finale’ of this opus in a transcription for three clarinets). There is a lovely recording by the Triebensee trio available in CD and on iTunes, if you wish to hear the original instrumentation. The work has been arranged for many different instrumental combinations.

You can see the original score here.

Well, this was most fun to practice and record. There is something about those moments in Beethoven when time is suspended, anticipation is palpable and then resolution comes. For the Adagio, that happens most poignantly in mm. 63-66, then, in due time, finally resolving in m. 71. This movement is all emotion, and being such, must be played with both skill and heart. I’m not sure I can offer much more suggestion beyond all three players learning their parts impeccably well and coming together as if you share one, pathos-laden heart (the one-heart concept is perhaps a little easier for me to pull off). Do enjoy the emotional wash of this one.

Jean-François Dandrieu (1681-1682) was a French composer and keyboard player (organ and harpsichord) and one of the most well-known harpsichordists of 18th century. His pieces called Les Caractères de la guerre (The Characteristics of War) featured the first use of a tone cluster (fists on the keyboard), to depict cannon fire. This arrangement is taken from the Le Fête de Vilage Gavotte-Rondeau of the Pieces de Clavecin, Première Livre from 1724. Here’s the IMSLP website for the score. You’ll find Le Fête de Vilage on p. 74.

This little piece sounds like a musette (French bagpipe), with the bass drone (passed around to all the parts) and the simple folk melody. Matching the low ‘g’ in tone and intonation between all the players is important. I omitted the ‘d’ in the second part, m. 8 on the fine. I settled on a tempo of quarter note at 84, as it seemed fast enough for young players to keep up with the 16ths and keep the musette quality of the piece. Try a faster tempo if you want a brighter quality to the gavotte style. Crisp and clean clarinet staccato is also a challenge here. Watch the articulation video for more information on clarinet staccato.

Franz Joseph Haydn (1732-1809) was the second son of a cartwheel maker and a cook. Are you wondering why the careers of someone’s parents were so important in a historical biography? Well, for someone like Joseph Haydn, who was enormously talented and needed talented and experienced teachers, finding the means to get this young boy an education was incredibly challenging for a father who made cartwheels (actual wooden wheels, not the acrobatic kind) and a mother cooked for the local Count. To complicate this further, they lived far away from anything resembling a music school. Fortunately, Joseph’s dad was a part-time musician and was able to send Joseph to live with a distant cousin who was a music teacher. Even before this music training, it was clear that Joseph was blessed with a great singing voice, destined for the church choir. Soon he made the big time: St. Stephen’s choir school in Vienna, at which he was taught singing, violin, music theory and composition, language and other studies and participated in least 2 performances (masses or other religious services) a day. Haydn had a long career working for one wealthy family, the Esterházy dynasty. His job description not only included composition and performing but also managing the musicians and their uniforms (including properly powdered wigs), the instruments and the library. It is possible that he wrote the very first theatrical symphony, called the ‘Farewell’, in which the performers all ended at different times, blew out their candles (on the music stands) and left the stage, leaving just two violins on stage at the end. It was supposed to be a hint to Prince Nicolas Esterházy that it was time to leave the summer mansion and go home to Vienna.

This work is the finale from the String Quartet, Op. 74, No. 2, one of the “Apponyi” quartets, composed in 1793. Here is the score, beginning on p. 21. This arrangement uses the first twenty-one and the last eighteen measures of the original finale movements.

This volume of Rubank trios seems to be all about the clarinet staccato (see my lesson video on clarinet articulation). It’s a great sound when done properly and getting there takes time and practice, but these highly articulated works are a great way to exercise one’s staccato muscles. There is a lot of dynamic drama here, so make the contrasts obvious (soft vs. loud, smooth vs. accented, staccato vs. slurred) but tastefully done (good tone and intonation). I chose 132 as a tempo, wanting it bright as I could perform cleanly. You may be able to do it faster, but as always, clean and with control will sound faster to the listener.

Friedrich (Daniel Rudolph) Kuhlau (1786-1832) was a German-born Danish composer. He spent the bulk of his career composing for and performing the piano. Herr Kuhlau wrote a number of works for solo flute and flute ensembles, although was not a flutist himself nor were his children, wife or best friend. He composed flute music for one un-romantic reason – to earn a buck. Historian Gorm Busk of The New Grove Dictionary Online does say that Kuhlau does seem to have had a natural affinity for flute composition. Perhaps he secretly wanted to be a flutist? We’ll never know. The Grand Trio in b minor, Op. 90 was composed in Mainz in 1828. There is a lovely flute recording on the Naxos label, by the European Flute Trio. Check those gals out too.

This trio requires all the players to be quite advanced technically and rhythmically solid. The extensive cross rhythms, for example in mm. 25-28 are enough to derail the best trio of professionals. With that said, this trio is a rip roarin’ good time for all musicians involved. I found my perfect tempos at 82 for the dotted half (beginning) and around 65-66 for the trio, however yours maybe different, so take care that too much listening at one tempo doesn’t lock you in to thinking only one tempo works. Remember that you can always use the Amazing Slow Downer or a similar program, if you want to hear recordings at a different tempo, see my ASD videos that demonstrate how to use my recordings with this software. Mostly, I recorded pretty much in tempo, although I do like a little pull back at m. 94, anticipating the return of the trio A theme. As always, work towards a crisp clean controlled clarinet staccato (clarinet articulation video viewing suggested) and please do add your own crescendo/decrescendo phrasings as good taste dictates. 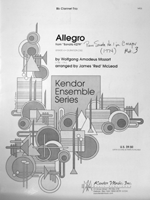 Wolfgang Amadeus Mozart (1756-1891) What can I add to Mozart’s famous story? Well, we can notice that fabulous name –– Johannes Christostomus Wolfgangus Theophilus Mozart (Mozart himself took to the Latin translation of Theophilus: Amadeus, Amadé or Gottlieb for casual occasions). Do you think his parents just couldn’t decide? Let’s remember that Wolfgang was an extremely talented musician, fortunate to receive a wealth of training and experience in music from a very early age. His ability to hear and recall music with the accuracy of a recording device meant that his absorption of all the performances he heard on his tours of Europe and Great Britain was so complete, that his style not only came to embody the best of what we now call the ‘Common Practice Period’ but went beyond in innovative and remarkable new directions.

Wolfgang wrote many piano sonatas, over the course of his brief life. This arrangement is the third movement of Mozart’s first piano sonata that he officially recognized, written when he was 18 or 19 years old, Sonata No. 1 in C major. You can see the piano sonata at the NMA (Neue Mozarteum-Ausgabe) website, if you wish to take a look at it. Here’s what to do when you get there: